Predicting childrens’ interests: I can’t do it, Yay! 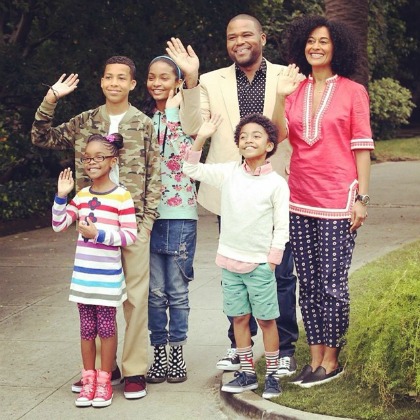 Two of my daughters are watching Black-ish, a sitcom about “an upper-middle-class African-American family” [wikipedia]. I think the characters are trying to figure out their cultural identity. Last year I was excited to hear about it and looked for it on, um, let’s say Chinese Netflix [1]. I watched the pilot episode [2] and filed it on the hard drive, where it sat inert for a year.

And a couple of days ago, one of the girls asked if I could find more of it.

I don’t even know how she found it amidst the debris on that disk. Maybe looking through TV shows alphabetically? She must like it better than Adventures of Brisco County Jr and Big Bang Theory.

Even though I wouldn’t have guessed she’d pick it out, I’m pretty happy she’s watching it. She’s been out of the US for over 4 years, and by the time we get back, it will be 5 years [3]. I want her to know what’s happening there, but instead she’s getting to know a little slice of China. That’s also good, and it’s a big part of why we’re here, but it would be nice if she doesn’t feel like a complete alien when we return. I can’t say that Black-ish is the definitive guide to race relations, but if she’s choosing to watch it during her precious computer entertainment time [4], then I’d say it’s at least one and a half birds with one stone. I mean it’s fun (one bird) and at least somewhat informative (half a bird? Maybe more?).

Today at lunch, sister #3 is watching it too.

“Why do you like it?” asks sister #1 (the only one who still isn’t watching Black-ish).

“It’s the only thing we have that I haven’t watched already.”

“I’ll bet we have lots of things you haven’t watched,” challenges sister #1.

“Well, all the science fiction shows and stuff.”

I jump in, “So you’re saying it’s interesting enough to watch?”

“Yeah, I guess so. Yeah, it’s interesting enough to watch.”

I’m pretty happy they’re watching it. Cultural identity and race relations are worthy topics, and it must have enough well-written funny bits to lighten up the serious. Maybe? I’ve only seen the pilot. The girls love family comedies [5]. I never would have guessed it would catch their interest, since it didn’t manage to hold mine. Is it a sign that they’re growing up?

[1] Hint: Its founder was recently released from Swedish prison. It’s unfortunately the only convenient way we’ve found to watch English language TV here. I told everyone we’d have to go legit when we move back to the Western Hemisphere, and use Hulu/Netflix/etc like civilized people.

[2] I like understanding race relations, but I think I’m just not a sitcom guy.

[4] They get an hour a day of messing around on the computer for entertainment. Okay, it’s not that strictly enforced, but it’s approximately an hour. Two hours on weekends. Plus some social time if they want to play Minecraft with their friends or something. Or make powerpoint presentations about kittens. And probably quite a bit longer on days when their parents go on long excursions. What I’m trying to say is we aren’t letting TV raise them entirely.

[5] New episodes of Modern Family bring all the girls to the couch, that’s right, and they all have advanced degrees in The Cosby Show.

This entry was posted in Georgia, Maya, Teresa, The World and tagged bittorrent, black-ish, parenting, race relations. Bookmark the permalink.

This site uses Akismet to reduce spam. Learn how your comment data is processed.